Manchester United’s attentions turn back to the Europa League this midweek, with Jose Mourinho’s men looking to extract some revenge on Feyenoord – who somehow managed to beat the Red Devils on their home ground quite some weeks ago now.

Ahead of the game, we’ve taken a look at the probable starting eleven, and as per usual it looks extremely strong despite several changes.

In goal, David de Gea will start with Phil Jones and Daley Blind in front of him. We’ll also see Timothy Fosu-Mensah get a rare start, as will Luke Shaw.

Marouane Fellaini has done pretty well at the start of this season and he’ll come back into the side here. Morgan Schneiderlin will also get the nod, allowing Michael Carrick a well-earned rest.

Wayne Rooney will play in behind Zlatan Ibrahimovic, and we’ll have Ashley Young and Jesse Lingard playing on the wings.

Check out the starting eleven here: 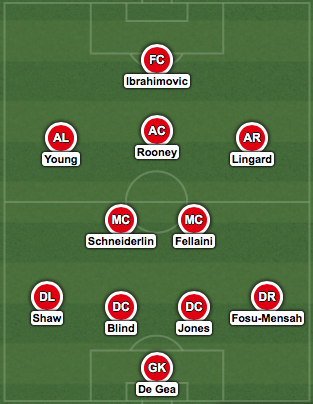 About Jordan Street 14364 Articles
I'm a 25-year old aspiring writer and I created the blog as a platform to discuss all things Manchester United. Season Ticket holder block E332.
Website

Manchester United Football Club are on a roll. With Ole Gunnar Solskjaer at the wheel, the Red Devils are eight wins from eight, beating down everyone in their path. Old Trafford has once again become […]

Manchester United Football Club take on Southampton this weekend, in a game where ex-Red Mark Hughes is fighting for his job. Jose Mourinho’s men have been struggling this season, so they’ll have to be at […]

With games coming thick and fast, for Ole Gunnar Solskjaer, it’s about managing his squad. It’s time for our predicted Man Utd XI vs Sheffield United. By the time this one kicks off, the 20-time […]