Manchester United head back to Old Trafford this weekend, after a couple of games away from home in succession. The Red Devils, take on Swansea City, with a chance to move up into the top four with a victory, albeit only temporarily, based on other results.

Ahead of that match, our squad is looking decimated by injury, so we’ve tried to decipher the great mind of Jose Mourinho, and work out what starting eleven he will go for here.

David de Gea will obviously continue in goal after a solid derby day display. In terms of the back two, the gaffer has no choice but to stick with Daley Blind and Eric Bailly, who, to their credit played well last time around. Luke Shaw should come back into the fold, with Antonio Valencia making up the back four.

Michael Carrick and Ander Herrera both started in the derby, but we literally have no other alternatives due to injuries and suspensions. This could be a real issue, but they’ll just have to play through.

Anthony Martial looked like a man reborn last weekend and he will be hoping to keep that up today. Henrikh Mkhitaryan will have to improve, and Jesse Lingard will come back into the mix. Marcus Rashford will play as the lone striker.

Have a look at the likely starting line-up here: 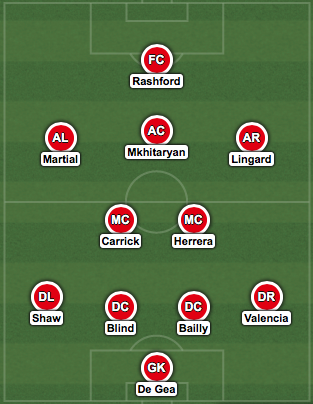 About Jordan Street 14192 Articles
I'm a 25-year old aspiring writer and I created the blog as a platform to discuss all things Manchester United. Season Ticket holder block E332.
Website

The transfer window opens in just a few hours time, and ahead of that we’ve decided to compile a potential signing XI for Manchester United. We all know the majority of our problems lie in […]

4-2-3-1: Manchester United potential XI vs Burnley – Mkhitaryan gets a start

Manchester United Football Club come into this one on the back of an excellent result against City, with Jose Mourinho’s men making it safely through into the quarter-final of the cup. Now, attentions turn to […]

Manchester United take on West Ham at Old Trafford this weekend, with Louis van Gaal hoping to get his side back to winning ways after a 1-1 draw away at Leicester last weekend. ahead of […]