Manchester United’s biggest game of the season so far takes place this weekend, with a home game against Arsenal coming this Sunday. Louis van Gaal will be keen to avenge the 3-0 loss at the Emirates last season, as well as propelling us to a spot in the top four come May.

With that in mind, the Manchester United boss simply has to play the strongest side possible in order to earn us the three points.

David de Gea will start in goal, with Cameron Borthwick-Jackson and Matteo Darmian playing as the full-backs. Chris Smalling and Daley Blind will start as the central pairing at the heart of defence.

Morgan Schneiderlin and Michael Carrick form the perfect blend in the midfield, with plenty of intelligence, as well as the ability to defend and move United forward where possible.

Wayne Rooney will lead the line, and he’ll have Anthony Martial, Juan Mata and Jesse Lingard in-behind him trying to supply our club captain. 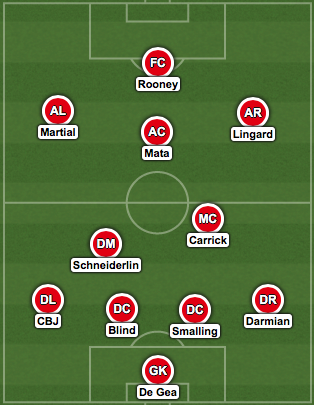 Manchester United take on Newcastle later today, with a couple of Louis van Gaal’s Premier League rivals breathing right down his neck as the hunt for a spot in the Champions League continues. Games like […]

Manchester United Football Club are playing games thick and fast over the hectic winter schedule, and another one is right on the horizon. Jose Mourinho takes his mean down South to play a West Ham […]