The games are coming thick and fast for Manchester United now, and after an excellent display at home to Stoke City last night, the fans will be after something similar heading into the game against Chelsea this coming Sunday.

Louis van Gaal probably won’t have enough time to welcome any new faces back into the squad from injury, so that will probably mean the starting XI will be extremely similar.

David de Gea will start in goal, with Daley Blind and Chris Smalling in front of him. Matteo Darmian will play on the right hand side, with Borthwick-Jackson continuing on the left after another fantastic performance.

Hopefully Morgan Schneiderlin will come back into the fold, playing alongside Michael Carrick. Juan Mata didn’t do all that much on Tuesday night, so we could well see a return for Ander Herrera.

The rest of the team should remain the same, with Anthony Martial, Jesse Lingard and Wayne Rooney making up the front line. 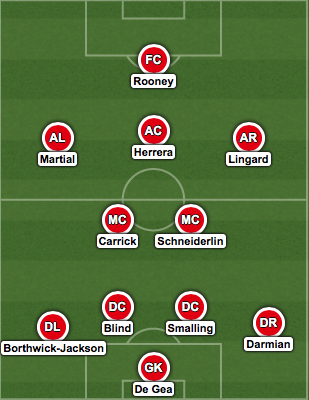 Manchester United returned to winning ways last time out as the Red Devils went to Stamford Bridge and dominated Maurizio Sarri’s men. Next up, another tough assignment. This time it’s Liverpool, although United will have […]

Our predicted MUFC XI for the Carabao Cup semi-final away game vs Nottingham Forest is now in… Manchester United’s winning run was ended by Arsenal at the weekend, with The Gunners winning it late. Alas, […]

Manchester United Football have the chance to take control of their Champions League group, if Louis van Gaal’s men can grab three points on the road in Russia. Hopefully the team that demolished Everton doesn’t […]