Manchester United and Louis van Gaal are simply desperate for a win today, with the future of the Iron Tulip firmly up in the air. Three points are simply a must for the Dutch manager, and the individual players will have to up their game considerably.

Ahead of the clash, Louis van Gaal has been given some timely injury news, as well as Bastian Schweinsteiger once again being available after a three game suspension due to violent conduct.

The German midfielder will slot straight back into the side alongside Michael Carrick, protecting a back line that could welcome Matteo Darmian back into action after being injured with a hamstring problem.

Ander Herrera will hopefully get a start in the #10 spot, with Anthony Martial and Memphis Depay occupying the wide areas. Wayne Rooney will almost certainly start up top. 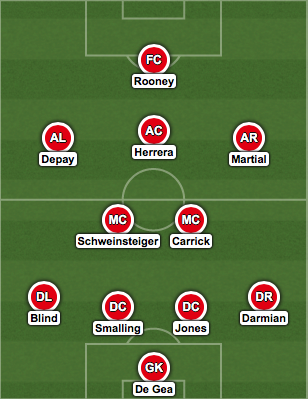 The games are coming thick and fast for Manchester United. Jose Mourinho’s men are fighting it out on four fronts, with attentions switching to Carabao Cup action this coming Wednesday. High-flying Championship side Bristol City […]

Manchester United head back to Old Trafford this weekend, after a couple of games away from home in succession. The Red Devils, take on Swansea City, with a chance to move up into the top […]