The games will start coming thick and fast for Manchester United over the next few weeks, and next up is a potential stumbling block in the Champions League. Louis van Gaal takes his side to Russia, where the travelling in itself will certainly be a concern.

With that in mind we should see a few changes for this one. This could be seen as the perfect opportunity to sit Anthony Martial out of action, with Memphis Depay coming in to take his place. Wayne Rooney will continue up top, with Ander Herrera holding down that #10 slot.

In the midfield we should see Michael Carrick come in for Bastian Schweinstieiger as Louis van Gaal will want to keep that rotation going.

Daley Blind comes back into the fold in the place of Phil Jones who is just back from a long-term injury. Marcos Rojo will continue at left-back after a superb performance, and Ashley Young is expected to miss out through injury. 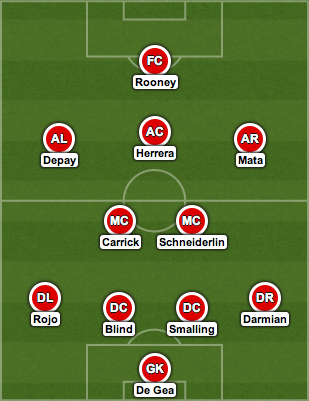 Choosing a Manchester United Team of the Decade seems to be the in-thing at the moment. I guess we’re coming to the end of a mixed ten years for the Red Devils, so picking this […]

Manchester United can close the gap on local rivals Manchester City to two points with a victory today, and they’ll be looking to put today’s opponents Tottenham Hotspur well and truly out of the race […]

Manchester United’s toughest task of the season takes place at Anfield tomorrow evening, with Jose Mourinho hoping to guide his side to a massive three points and get things back on the right track. Obviously, […]