Manchester United take on Everton this weekend, with Louis van Gaal clearly keen to back up that stunning derby day victory before the international break. The race for a spot in the top four is certainly tight, and three points here would do confidence the world of good.

Ahead of the game, we’ve taken a look at the starting XI, and it certainly is strong, particularly in the attacking area of the field.

David de Gea will obviously get the nod in goal, with Daley Blind and Chris Smalling starting in front of him. Matteo Darmian will play on the right, with Marcos Rojo holding down that left-back slot in Luke Shaw’s absence.

Ahead of them will be a midfield duo of Morgan Schneiderlin and Marouane Fellaini, whom will certainly prove tough to break down, and should be able to command the middle of the field.

As previously mentioned, the front four is by far the most attractive part of the team at the moment, as it includes plenty of pace, trickery and raw finishing ability. Anthony Martial will lead the line, Jesse Lingard will be in just-behind him, where he played in the derby. On the wings we have Memphis Depay and Marcus Rashford who have pace to burn, and love to go at the opposition defence.

Check out the formation here: 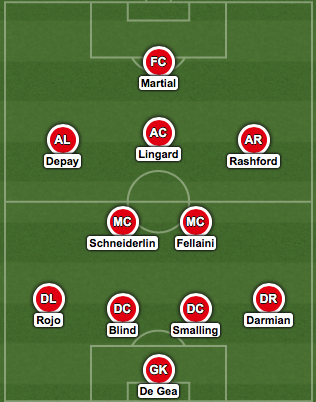 The real stuff starts now. Jose Mourinho’s first competitive game as manager takes place this coming Sunday, and what a match we have in prospect. Manchester United will be looking to kick things off with […]

Manchester United’s season has been a forgettable one. Things are now winding down to a close, though, with just two games remaining. For Ole Gunnar Solskjaer it’s already about building for next season. The club […]

After a dire performance in the Champions League, Manchester United’s attentions turn to a top of the table clash away at Leicester City – the surprise package in the Premier League this term. Louis van […]