Manchester United begin their Europa League campaign this coming Thursday, after the disappointment of exiting the Champions League despite being in a relatively easy group. However Louis van Gaal will be keen to make an impression, as United are yet to win this tournament in their history.

It will also be seen as a good game to rest some regular faces, including the likes of Wayne Rooney and Michael Carrick who have played plenty of games recently.

Anthony Martial will lead the line with Juan Mata in-behind him. Jesse Lingard will start on the right hand side of the field, with Memphis Depay getting a much-needed start on the left-wing.

Morgan Schneiderlin and Marouane Fellaini will begin in the centre of the park, and they’ll have Cameron Borthwick-Jackson, Matteo Darmian, Daley Blind and Chris Smalling in-behind them. David de Gea will obviously continue in goal. 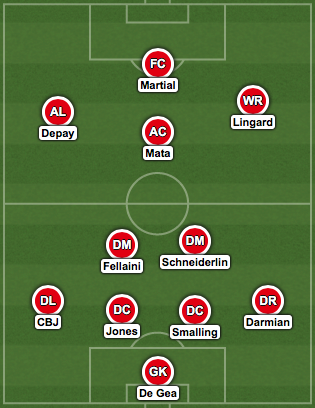 Manchester United Football Club turns their attentions to the semi-final of the EFL Trophy tomorrow evening, when Hull City visit Old Trafford under new management after the sacking of Mike Phelan. The match is the […]

Well, after a couple of months without Manchester United action, the Red Devils will take to the field once again in a couple of days time. After almost week of training out in Australia, the […]