Manchester United take on Liverpool this weekend, in one of the most eagerly anticipated fixture lists on the calendar. Louis van Gaal’s side come into this one with good recent form against their fiercest of rivals, but with Jurgen Klopp now in charge at Anfield, it will certainly be tougher.

David de Gea will likely continue in goal, with a bad four including Matteo Darmian, Chris Smalling, Daley Blind and Ashley Young that should be good enough to deal with the Liverpool threat.

Morgan Schneiderin will continue in the holding midfielder role, but there is a timely boost as Bastian Schweinsteiger is looking likely to come back into action after suffering a knee injury.

Anthony Martial will once again be shoved out onto the left, with Jesse Lingard on the right. Under Herrera will start in the #10 spot in behind club captain Wayne Rooney. 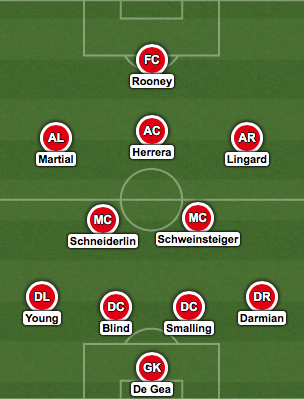 Manchester United are in with a real shout of going all the way in the FA Cup this year, with a favourable fifth round draw in the offing. Louis van Gaal takes his side South […]

Manchester United and Louis van Gaal don’t have much time to think about tactics against Spurs, with less than 48 hours in between that game and the one against Newcastle yesterday. United are on a […]

Manchester United’s pre-season tour has been a successful one thus far. Jose Mourinho’s men are three wins from three games, including an excellent victory over Manchester City. Next up, Real Madrid in our second game […]