Manchester United’s attentions turn to the FA Cup this weekend, with Louis van Gaal’s side hosting Sheffield United at Old Trafford. England’s premier cup competition hasn’t been lifted by United in over ten years, and it surely should be high on Louis van Gaal’s priority list.

Ahead of the game we’ve decided to pick out a strong, but youthful starting XI.

In goal is Sergio Romero, who hasn’t featured an awful lot since David de Gea penned a new contract at Old Trafford. Daley Blind starts at left-back, with Ashley Young at right-back due to injuries. Paddy McNair starts in the centre alongside Jones.

Michael Carrick and Morgan Schneiderlin will hold down the middle of the park, with plenty of flair in front of them. Adnan Januzaj has returned from his loan spell and should start on the right, with Memphis Depay on the left-hand side. Ander Herrera starts in the #10, and Anthony Martial will lead the line. 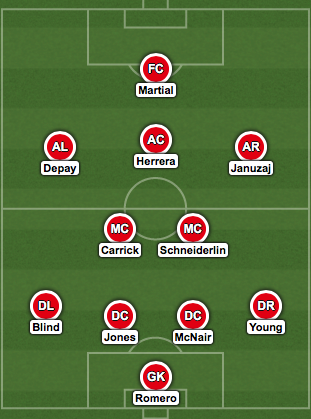 Manchester United’s attentions rapidly return to domestic cup action, with a trip to Preston coming on Monday night. Louis van Gaal was unhappy with the level of performance against Burnley, and he’ll be expecting much […]

Manchester United return to continental competition this coming Tuesday, with Louis van Gaal’s side hosting CSKA Moscow. The teams met just a fortnight ago and played out an entertaining 1-1 draw in a game that […]

Manchester United Football Club has had a tough week. All of the sudden, the Red Devils are five points off the pace in the Premier League, which simply has to be a concern to Jose […]