Manchester United are in with a real shout of going all the way in the FA Cup this year, with a favourable fifth round draw in the offing. Louis van Gaal takes his side South to take on League One club Shrewsbury Town, but the Old Trafford club must not take them for granted.

Sergio Romero will get a rare start in goal, with the English pairing of Phil Jones and Chris Smalling just in front of him. Matteo Darmian will play on the right, with Cameron Borthwick-Jackson on the left.

Morgan Schneiderlin and Michael Carrick should have more than enough ability to hold down the middle of the park, with Memphis Depay, Juan Mata and Jesse Lingard making up the attacking trio. Wayne Rooney will once again lead from the front, as our club captain closes in on Sir Bobby Charlton’s goalscoring record. 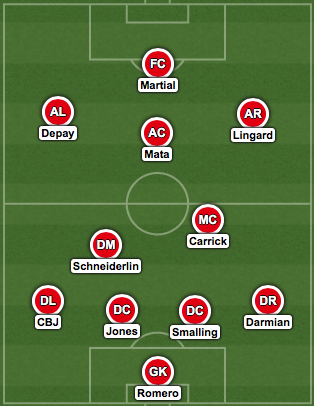 Manchester United overcame Club Brugge 3-1 at Old Trafford, putting Louis van Gaal’s side one step away from the Champions League proper. Brugge didn’t really bring a lot to the table in the first leg, […]

Manchester United Football Club turns their attentions to defending their FA Cup for the first time this weekend. Former Red hero Jaap Stam will bring his excellent Reading side to Old Trafford on Saturday lunchtime, […]