Manchester United’s attentions turn to FA Cup action tomorrow, with Louis van Gaal’s side heading to Shrewsbury Town. League One opposition have been tough for United in the past, as we lost to MK Dons, struggled against Yeovil and even Cambridge Town were a real tough task.

With that in mind I expect the manager to go with a strong team to ensure progression. Wayne Rooney will lead the line, with Juan Mata in behind him. There will be a rare start for Adnan Januzaj on the right wing, with Anthony Martial continuing on the left.

Marouane Fellaini and Michael Carrick will hold down the midfield, and they should have more than enough firepower to do so. Cameron Borthwick-Jackson deserves to continue in the left-back slot, with Matteo Darmian on the right. Daley Blind and Chris Smalling will protect Sergio Romero who will be called into action for the first time in a while. 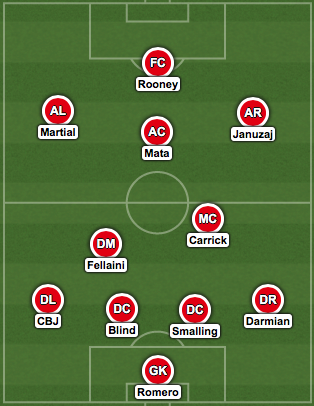 Manchester United are in with a real shout of going all the way in the FA Cup this year, with a favourable fifth round draw in the offing. Louis van Gaal takes his side South […]

Manchester United find themselves in a sticky situation. A player vs manager row is protruding through the club at the moment. Stuff like this would have never happened under Sir Alex Ferguson. Jose Mourinho has […]