Manchester United have been on a great run since the turn of the year, with Louis van Gaal slowly but surely winning some of the Old Trafford faithful back. That can continue this weekend if the Iron Tulip can secure a victory against a Southampton side who’ll certainly pose a threat.

Ahead of the game, Louis van Gaal is set to be given a major lift, with a pair of midfielders looking likely to return for the game. If fit, both of which should come straight back into the starting line-up, with Michael Carrick and Bastian Schweinsteiger set to be involved.

David de Gea will start in goal, with Chris Smalling and Daley Blind starting as the two centre-backs. Cameron Borthwick-Jackson deserves to continue after a spirited performance against Liverpool, which will also allow Matteo Darmian to play on the right-hand side.

Memphis Depay is another player who deserves to come back into the line-up, with Ander Herrera starting as the #10, and Anthony Martial out on the right. Wayne Rooney will continue as the lone striker. 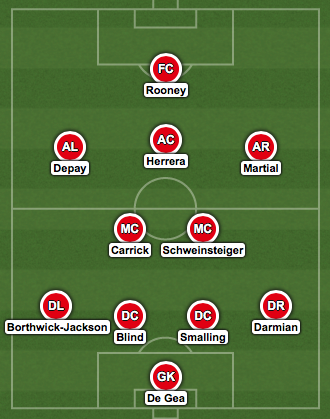 Manchester United head to Liverpool this weekend, with Brendan Rodgers and Louis van Gaal locking horns for the second time this season. The Red Devils are currently edging the battle for a spot in the […]