Manchester United Football Club progressed safely through into the fifth round of the FA Cup over the weekend, with a 3-1 victory over Derby. Now attentions turn back to the bread and butter of the Premier League, and Stoke City await.

Louis van Gaal will clearly have to go full strength to put United back on track in the league, but injuries have certainly made that much tougher.

Wayne Rooney will start as the sole striker, with Ander Herrera, Anthony Martial and Memphis Depay in-behind him. Michael Carrick and Morgan Schneiderlin will protect an extremely young looking back four.

Cameron Borthwick-Jackson will start at left-back, with Guillermo Varela continuing at right-back after an excellent performance last time around. Chris Smalling and Daley Blind will start as the back two once again, with David de Gea continuing in goal. 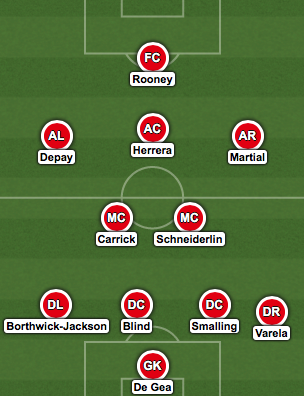 About Jordan Street 15254 Articles
I'm a 25-year old aspiring writer and I created the blog as a platform to discuss all things Manchester United. Season Ticket holder block E332.
Website

Manchester United kick off their Premier League campaign away from home this year, with Jose Mourinho heading to the South coast. He takes on Eddie Howe’s Bournemouth side who had a solid debut season in […]

Manchester United’s attentions turn to the FA Cup this weekend, with Louis van Gaal’s side hosting Sheffield United at Old Trafford. England’s premier cup competition hasn’t been lifted by United in over ten years, and […]