Manchester United are looking good at this point in time, with Sunderland next up in the Premier League. Van Gaal’s side sit two points off top spot at the moment and a win this weekend will only increase the pressure on local rivals Manchester City.

Team selection is always important, with the manager going strong against Ipswich Town, I don’t see too many changes being made.

David de Gea will obviously keep his spot in between the sticks, with the centre-back pairing of Chris Smalling and Daley Blind in front of him. Matteo Darmian will come back in at right-back, and hopefully Marcos Rojo is fit and able to slot back in at left-back. 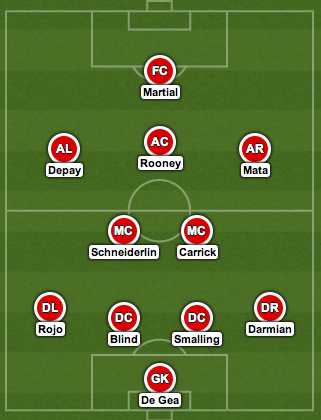 Our predicted MUFC XI for the game vs Bournemouth is now in. Manchester United had themselves an excellent start to the New Year, with the Red Devils gaining ground on some competitors over the course […]

Manchester United announced the signings of Radamel Falcao and Angel Di Maria over the past week, and despite the lack of Champions League football, it highlights just how much of an attractive proposition playing for […]

Manchester United have confirmed Jose Mourinho as their new manager, with the Portuguese coach already beginning work. With the European Championships looming, that gives the former Chelsea boss some time to work in the transfer […]