Manchester United will be looking to get back to winning ways after a disappointing draw away at Chelsea this coming weekend, with a trip to Sunderland. Ahead of the game, we’ve decided to have a look at the early keys to the line-up.

David de Gea will obviously start in goal, and he’ll have Chris Smalling and Daley Blind just in front of him. Cameron Borthwick-Jackson has been phenomenal over recent weeks and will certainly continue. Matteo Darmian will hold down the right-back slot.

Michael Carrick’s presence has certainly been felt recently, and he’ll have Morgan Schneiderlin alongside him. The front four is where it gets really interesting though.

Juan Mata will start in the #10 slot, with Anthony Martial and Jesse Lingard either side of him. Our in form club captain Wayne Rooney will once again lead the line. 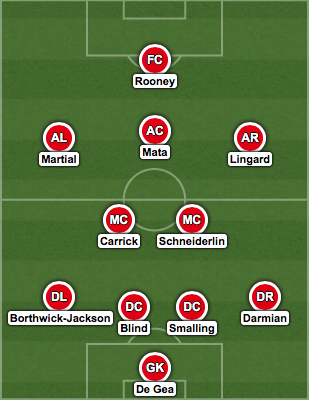 Manchester United have made it three wins on the trot since Ole Gunnar Solskjaer took charge at Old Trafford, as the Red Devils have rediscovered their identity and it’s absolutely brilliant to watch. Twelve goals […]

Manchester United Football Club have made an excellent start to the season, with Jose Mourinho certainly getting the right tune out of his current crop of players. With three wins from three, it looks as […]

The second Manchester derby of the season is upon us, and Manchester United will be out for revenge after suffering a 1-0 defeat last time out. The tables have turned somewhat since then, as this […]