Manchester United take on Swansea this weekend, and are still without a win in eight games. The pressure is mounting on Louis van Gaal, with the Dutch manager looking struggling to be able to motivate his players anywhere near sufficient enough.

The team played quite well last time out, but still couldn’t manage the victory. That said, I don’t think we’ll see many changes here, unless they are forced through injury.

Wayne Rooney will continue up top, with Ander Herrera in behind him. Anthony Martial will start on the right-hand side, with Memphis Depay coming back into the team on the left.

The ‘Schmidfield’ will once again continue in the holding midfielder roles. They had the Chelsea midfield on lockdown last time around, and they should be able to control the game once again.

Phil Jones and Chris Smalling start as the centre-halves, with Daley Blind and Ashley Young starting in the full-back positions.

Check out the line-up here: 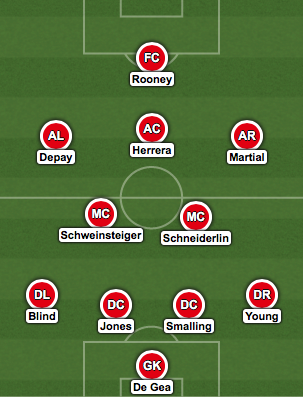 Manchester United will be hurting after dropping points at home in the Premier League last time out, and now attentions turn back to European football. Next up, a tricky trip to Russia to take on […]

How injury-hit Man United could line up without Pogba, Varane & Cavani

With the injuries mounting, we’ve taken a closer look at how Ole Gunnar Solskjaer could line up with his current Man United options. Manchester United Football Club find themselves in a messy situation yet again. […]