Manchester United Football Club turn their attentions back to the Premier League this weekend, with a win here essential to cling onto any hopes of finishing in the top four this season. As games come they don’t get any easier than a home match against bottom of the league Aston Villa.

Louis van Gaal’s side did excellently away at West Ham last time around, and the players who did well in that game more than deserve to continue. David de Gea will start in goal, with Daley Blind and Chris Smalling in front of him. Timothy Fosu-Mensah simply has to continue, with Matteo Darmian coming in for Marcos Rojo who has been poor. 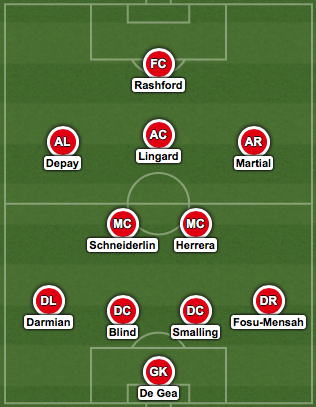 Manchester United comfortably progressed through to the fifth round of the FA Cup on Tuesday night, and now attentions will be refocused on Premier League football, and obtaining a spot in the top four. The […]

Manchester United overcame Club Brugge 3-1 at Old Trafford, putting Louis van Gaal’s side one step away from the Champions League proper. Brugge didn’t really bring a lot to the table in the first leg, […]