Manchester United’s attentions rapidly turn back to the bread and butter of the Premier League, as Louis van Gaal’s men will continue to fight to try and push for a spot in the Champions League despite how bleak things are looking at the moment.

Next up on the fixture list is a game against bottom of the table Aston Villa, in a game United simply have to win, and win well.

David de Gea will continue in goal, with the same back four in front of him that played so well against West Ham.

I’d like to see Morgan Schneiderlin back in from the start, alongside Marouane Fellaini who played well in that game. Juan Mata should continue to miss out, with Ander Herrera getting the nod. The front three of Jesse Lingard, Anthony Martial and Marcus Rashford simply have to continue. 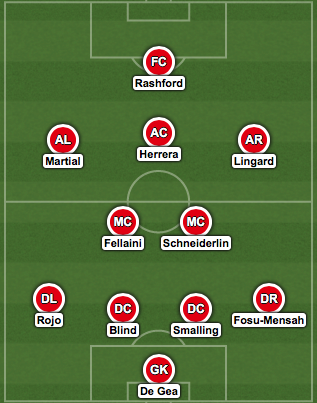 Our predicted MUFC XI for the Carabao Cup semi-final away game vs Nottingham Forest is now in… Manchester United’s winning run was ended by Arsenal at the weekend, with The Gunners winning it late. Alas, […]

Manchester United and Cambridge went head-to-head just over a week ago, and the League Two side fought valiantly to earn a big payday and a replay at Old Trafford. The game tomorrow should be completely […]