Manchester United secured their first win in four games last night, and Louis van Gaal will be keen to back up a much-improved performance this weekend against West Brom in the Premier League. At the heart of that game was the young Jesse Lingard who simply has to continue.

They’ll only be one change across the back four, with Phil Jones coming back into the mix in place of Daley Blind. Matteo Darmian is suspended and it looks as though Antonio Valencia won’t return from injury in time.

The midfield two of Bastian Schweinsteiger and Michael Carrick did extremely well last night and they have more than earned the chance to continue.

As for the front four it has to remain the same. Jesse Lingard brought plenty of energy, Juan Mata brings that creativity and Anthony Martial just simply cannot be dropped at the moment. The jury is still out regarding Wayne Rooney. 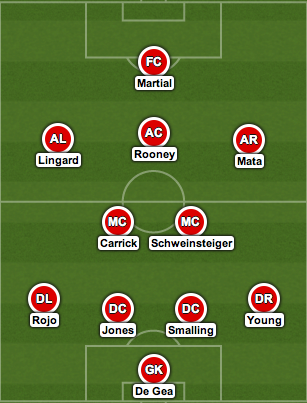 Manchester United begin their Europa League campaign this coming Thursday, after the disappointment of exiting the Champions League despite being in a relatively easy group. However Louis van Gaal will be keen to make an […]

Manchester United simply have to get back to winning ways on Wednesday, as the struggling Burnley FC visit Old Trafford. In their last meeting, Burnley held United to a 0-0 draw as Angel di Maria […]

Manchester United return to the home comforts of Old Trafford after back-to-back away games in the league. Louis van Gaal’s men go into the weekend sitting third in the Premier League table, and they’ll be […]