Manchester United return to the home comforts of Old Trafford after back-to-back away games in the league. Louis van Gaal’s men go into the weekend sitting third in the Premier League table, and they’ll be looking to improve on that this coming Saturday.

Ahead of the game the manager has plenty of injury concerns and selection dilemmas on his hands, but there are a few players such as Bastian Schweinsteiger, Anthony Martial, David de Gea and Chris Smalling who simply have to start.

Personally I’d like to see Wayne Rooney sit out for a game or two, which will allow Martial to continue up top. Juan Mata will play out on the right hand side with Ashley Young on the left. Memphis Depay will be given a chance in the centre.

Morgan Schneiderlin should come back into the side as a holding midfielder in the place of Michael Carrick, and hopefully Marcos Rojo is fit enough to return from injury. 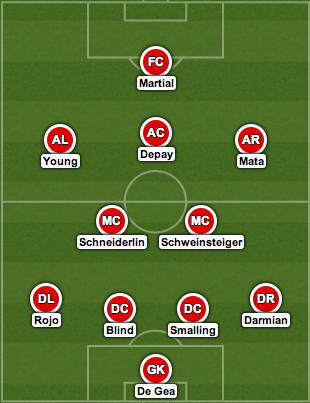 About Jordan Street 15223 Articles
I'm a 25-year old aspiring writer and I created the blog as a platform to discuss all things Manchester United. Season Ticket holder block E332.
Website

Manchester United can capitalise on Chelsea’s 2-1 loss to Newcastle yesterday, by taking all three points away at Southampton this Monday night. There is probably no better time to play Koeman’s side, as their injury-hit […]

Manchester United return to league action this coming Sunday, with a potentially tricky fixture against West Ham United in the offing. United always seem to struggle against the Hammers, and with Big Sam’s more attacking […]