Manchester United Football Club lost their Champions League opener away at PSV, as Luke Shaw suffered a serious leg injury in the game. Louis van Gaal will be keen to right a few wrongs and get some points on the board at home to Wolfsburg this coming Wednesday.

The manager will probably make a few changes just to freshen things up, but I don’t expect to see anything too drastic.

One of the players missing out could be Anthony Martial, who has featured heavily for United recently and Louis van Gaal will be wanting to give him a well-deserved rest.

Ander Herrera and Ashley Young will come into the side, with Bastian Schweinsteiger also returning to the midfield.

Matteo Darmian will continue at left-back with Antonio Valencia at right-back. The pairing of Daley Blind and Chris Smalling has been superb recently, and obviously David de Gea keeps his place in goal. 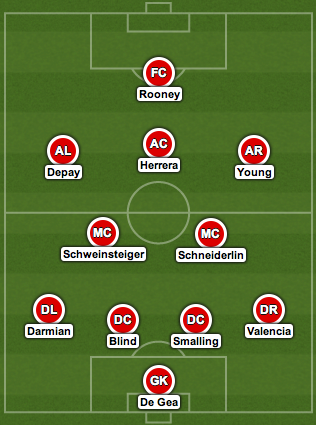 Jose Mourinho’s Premier League Old Trafford bow is here. The self-proclaimed Special One is ready to walk out of that famous tunnel for the first time in a competitive game as our boss – and […]

Manchester United return today, after a two week absence due to the international break. Louis van Gaal won three out of three Premier League matches in March, and he’ll be looking to kick off April […]

Manchester United will be hurting after dropping points at home in the Premier League last time out, and now attentions turn back to European football. Next up, a tricky trip to Russia to take on […]