Manchester United’s attentions turn back to the bread and butter of Premier League football tomorrow evening, as Sean Dyche’s tough-battling Burnley side visit the Theatre of Dreams. After Jose Mourinho’s press conference, we’ve decided to try and predict our starting line-up.

In goal, we’ll have the reliable hands of David de Gea. The Spaniard has been nothing short of sensational over the last few years, and that has to continue here. Luke Shaw did well in midweek, so it’ll be good to see him get some more minutes. Antonio Valencia will play as the right-back. Daley Blind and Chris Smalling were nothing short of abysmal a week ago, but they’ll be reunited for this one as a show of faith in them by the gaffer.

Onto the midfield, and I think a switch to a two-man setup is likely as Burnley will probably sit back. Ander Herrera and Paul Pogba will get the nod. The front four looks brilliant.

The front four looks brilliant. Zlatan Ibrahimovic will start as the striker with Juan Mata just in-behind. Marcus Rashford will play on the left-hand side, with Anthony Martial getting a first start in over a month. 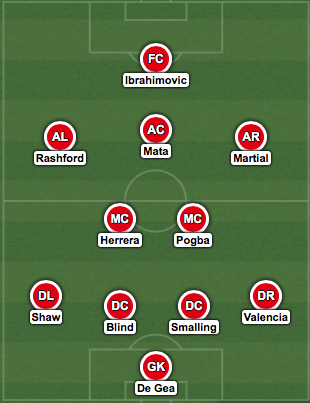 Manchester United’s attentions rapidly turn back to the bread and butter of the Premier League, as Louis van Gaal’s men will continue to fight to try and push for a spot in the Champions League […]

Attentions turn back to continental football this coming Thursday, with Manchester United looking to get another win on the board to take control of their group. Feyenoord are the visitors, with Jose Mourinho wanting to […]

The end of our campaign is here, with our predicted MUFC XI vs Crystal Palace now in. For many, it’ll be a welcome relief to hear that the end of the season is upon us. […]