Manchester United’s hopes and dreams of acquiring a finish in the top four of the Premier League seem to be over. The Red Devils gave up all hope last weekend, as Arsenal beat them 2-0 in North London, to overlap us in the table and put themselves in pole position.

This weekend sees another trip to London in the offing, to take on Arsenal’s fiercest rivals, Tottenham Hotspur. Now that we’ve secured our place in the Europa League final, it would make an awful lot of sense to hand some of our stars rest. Let’s take a look at our predicted line-up for the encounter.

In goal, David de Gea will return after sitting out in midweek. He has become one of the best in the business, and there is no doubts that he will continue to put in good performances.

The back four is where we could see a few changes. I’d imagine that both Phil Jones and Chris Smalling have to start in order to build up their match fitness ahead of the Europa League final. Axel Tuanzebe acquitted himself wonderfully well last time around so he will start. Daley Blind will make up the back four.

Michael Carrick’s experienced head will be given the nod in midfield, and hopefully, alongside Scott McTominay – another youngster who has been on the fringes of things recently. Wayne Rooney will start just in front of the more defensive-minded duo.

Juan Mata will play which will help. The pace of Anthony Martial and Jesse Lingard on the counter attack could cause Spurs’ back line problems and hopefully, we’ll be able to go out and secure a positive result.

Have a look at the full starting line-up here: 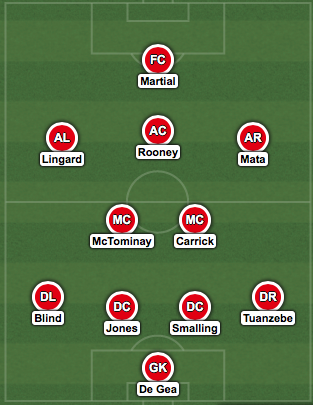 Manchester United’s Premier League season is drawing ever closer, and what an exciting campaign we have ahead of us. Our new boss Jose Mourinho has already begun work on moulding the new squad, and it […]

Manchester United host Everton at Old Trafford tomorrow, and Louis van Gaal will be hoping for a victory that could potentially lift United into the Champions League places if other results go our way. Despite […]