With the addition of Anthony Martial, the Iron Tulip now has more options available to him, allowing him to drop Wayne Rooney back into the #10 role with the speedy Martial coming in as a striker. The 19-year old Frenchman could be a real asset to Manchester United. We’ve seen how pace and power can be utilised, just look at Sergio Aguero.

We’ve also managed to keep hold of David de Gea somehow, and it’d be foolish not to use his talents for the remainder of the season as it’ll probably be the last we see of him.

The rest of the starting XI should be as is as the players involved haven’t really done an awful lot wrong – particularly the back line who have looked solid. 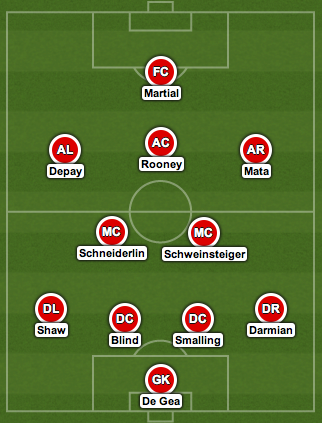 Manchester United Football Club certainly mean business during this transfer window, with Jose Mourinho looking to conclude deals as soon as possible. The self-proclaimed Special One has already signed Eric Bailly, and deals for Ibrahimovic […]

Manchester United Football Club are all set to play their first game in well over a month. Jose Mourinho’s men take on the LA Galaxy at the StubHub Center tomorrow evening, and it’ll be a […]

A place in a Wembley final awaits Manchester United if they can overcome Hull City in the second leg of the EFL semi-final. Jose Mourinho’s men lead the first leg by a 2-0 scoreline, thanks to […]