Manchester United are almost in a mustn’t-lose situation already, despite it being so early on in the season. Next up, a visit to Old Trafford for newly promoted Brighton.

Make no mistake, this match will not be easy. The South Coast side will come to the Theatre of Dreams and show plenty of fight, so the Red Devils will have to be at their best. Ahead of the clash, we’ve drawn up the starting XI that we believe Jose Mourinho will opt for. 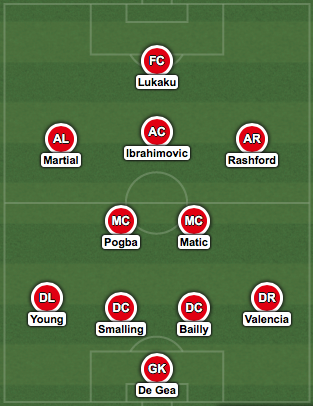 In goal, David de Gea will return following him being rested during the midweek Champions League match. We could welcome Eric Bailly back at the heart of our defence, most likely alongside Chris Smalling. On top of that, the now regular full-back duo of Ashley Young and Antonio Valencia will return.

Paul Pogba has just been sensational since coming back from injury. He’ll continue his return to full fitness during this one, alongside Nemanja Matic of course.

Then we get to the most exciting part of the team. Mourinho has been deploying both Anthony Martial and Marcus Rashford from the start recently, hopefully, that’ll continue to happen. Zlatan Ibrahimovic will make his first start in the #10 role, with Romelu Lukaku leading the line.

Manchester United simply have to win tomorrow night, in one of the toughest stadiums in world football to go to at the moment. Louis van Gaal takes his side to Wolfsburg, with his squad severely […]

Manchester United will almost certainly look like a completely different outfit come August, with Jose Mourinho keen to mould the squad in his image. With the European Championships underway, moves at the moment are hard […]