Manchester United only played West Ham at Old Trafford on Sunday, but Jose Mourinho will already be putting his players through their paces to face off against the Hammers once again – this time in the EFL Cup, where a place in the semi-final is at stake.

The league meeting finished 1-1 despite the hosts having the better chances and much more of the ball – but on Wednesday night there will be a winner one way or another.

Before the game, we’ve decided to try and pick Jose’s brain and work out what starting line-up we’ll likely see – and it’s not easy. Remember, this is just our opinion.

In goal, David de Gea will almost certainly keep his place, with the centre-back pairing of Marcos Rojo and Phil Jones in front of him. Antonio Valencia is playing excellently at the current time so he’ll start, and hopefully, Luke Shaw will get the nod at left-back.

The midfield is the real area of concern. Michael Carrick missed the weekend game due to an injury, and now Paul Pogba and Marouane Fellaini are both suspended. Bastian Schweinsteiger doesn’t have any match fitness, so it’ll probably be Morgan Schneiderlin partnering Ander Herrera.

Attacking-wise, we still look very strong. Wayne Rooney will play in behind Zlatan Ibrahimovic, with plenty of pace and creativity either side of him in the form of Henrikh Mkhitaryan and Anthony Martial. 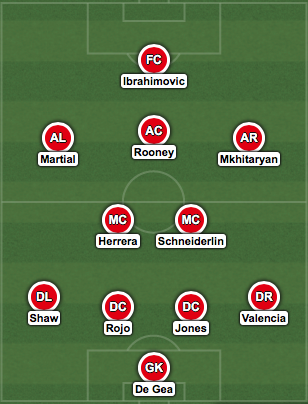 Manchester United were struck down with an extremely cruel injury blow last night, as Luke Shaw was stretchered off after suffering a broken leg during the 2-1 loss to PSV in Eindhoven last night. Louis […]

Manchester United take on FC Midtjylland in the Europa League tomorrow, with Louis van Gaal’s side looking to progress into the last sixteen round over two legs. Ahead of the game we’ve decided to have […]

After the success in the FA Cup semi-final, Manchester United’s attentions swiftly turn back to the bread and butter of the Premier League, which each of their last four fixtures all cup finals themselves. Louis […]