After another successful Premier League weekend is in the books for Manchester United, their attentions turn back to continental football. Jose Mourinho’s men head to Russia in a strenuous away fixture, but, the Red Devils will be hoping for three points.

With that in mind, we’ve decided to work out what starting XI the manager will employ for this game. It hasn’t been easy, because we’re still unsure as to how much rotating he is planning on doing. 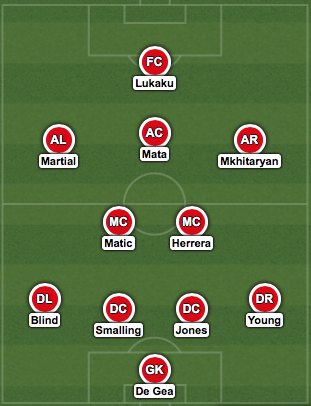 Anyway, of course David de Gea will start in goal. The Spaniard has been in good form over the last couple of weeks and you’d fully expect that to continue. Phil Jones was my Man of the Match against Southampton and he should start – probably alongside Chris Smalling. Ashley Young will shift to right-back, allowing Antonio Valencia to rest. Daley Blind makes up the back four.

I can see Mourinho giving Marouane Fellaini some time off here, with Ander Herrera coming in as his like for like replacement. Nemanja Matic will get the nod in his first Champions League away fixture for his new club.

Juan Mata’s creativity could come in handy in a tight-knit affair, and the Spaniard will have the superstar 21-year-old Anthony Martial and the brilliant Henrikh Mkhitaryan either side of him. Romelu Lukaku leads the line.

The Manchester derby is fast approaching, with United currently sitting one place and a solitary point above their local rivals City. Finishing third would be a good end to an topsy-turvy season for the Red […]

Manchester United’s attentions turn to cup football on Sunday, as the lads travel to unfamiliar territory in the form of Huish park. Louis van Gaal will be hoping for a better cup run, and he’ll […]