Manchester United are sitting joint top of the Premier League table right now, alongside fierce rivals Manchester City. The games are starting to come thick and fast across all competitions, and next up is a potentially tricky away game at Southampton.

Jose Mourinho will be feeling in confident mood following a few excellent displays on the spin – and ahead of that match, we’ve tried to work out the starting XI that the boss could pick. 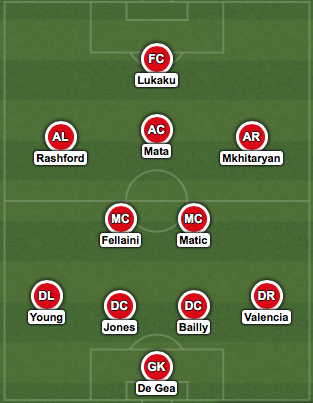 In goal, David de Gea will return following his absence in midweek. He’ll have the usual back two of Phil Jones and Eric Bailly in front of him, with Ashley Young and Antonio Valencia both restored to the XI.

Nemanja Matic has been an absolute colossus for us since he joined from Chelsea, and he’ll be hoping to put in another commanding performance here. Marouane Fellaini will also start, giving us a huge height advantage.

Then onto the front four. Of course, Romelu Lukaku will start as the main striker. Henrikh Mkhitaryan will also play once again, as will Juan Mata. The big dilemma was picking the left-sided attacker as both Marcus Rashford and Anthony Martial played superbly at the weekend. I’ve opted for the former to get the nod.

Manchester United face one of their toughest tasks of the season on Thursday, with their second trip of the campaign to Anfield taking place, and the first match of a double header against Liverpool. Louis […]

Manchester United play their second away game in succession this weekend, with a potentially tricky trip to Swansea City. Louis van Gaal seems to have got his well oiled machine working again, with United only […]