After another extremely disappointing result in the Premier League, Manchester United’s attentions turn back to continental football, with a potentially tricky away trip in the offing. Fenerbahce and Turkey will provide a tough task for a reds team that will contain a few changes.

As you can see from the team below, the first change starts in goal with Sergio Romero getting another start. He’ll have a regular back two of Daley Blind and Chris Smalling in front of him, with Luke Shaw and Timothy Fosu-Mensah starting as the full-backs.

The midfield duo of Morgan Schneiderlin and Ander Herrera is a strong one. The Spaniard will likely start here as he won’t be available at the weekend due to that red card he picked up against Burnley. Juan Mata will play just in front of them in the #10 role.

Ashley Young did well against Liverpool and I expect him to be recalled to the fold on Thursday, and it’ll also be lovely to see Henrikh Mkhitaryan start on the right-hand side. Zlatan Ibrahimovic will get a rest, with Marcus Rashford starting as the sole striker. 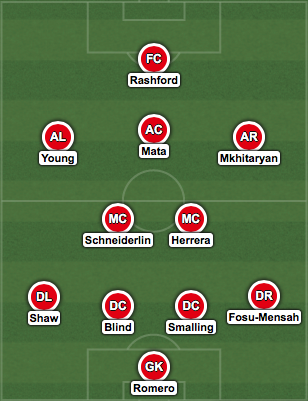 Manchester United head to one of the trickiest places on the fixture list this Boxing Day, and with Louis van Gaal’s future up in doubt it could be made even tougher. If the Iron Tulip […]

Manchester United Football Club have made an excellent start to the season, with Jose Mourinho certainly getting the right tune out of his current crop of players. With three wins from three, it looks as […]