Manchester United Football Club have a big game on their hands this weekend, and as we all know, away trips to Stoke City are never easy. Jose Mourinho’s men drew 1-1 with The Potters’ in the game at Old Trafford earlier on in the season, and he’ll be looking to make amends for that.

Ahead of the 15:00 BST clash on Saturday, we’ve picked out a side that’ll probably be our starting eleven.

In goal, we have none other than David de Gea, who is in my opinion, by far and away the best goalkeeper in the country. United’s defensive partnership of Phil Jones and Marcos Rojo – who have both been brilliant lately. Antonio Valencia will play at right-back, and I’d like to see Daley Blind come back into the team ahead of Matteo Darmian.

Michael Carrick had a poor first half against Liverpool and I can see the manager make him sit this one out. That’ll mean us shifting to a midfield two, with both Paul Pogba and Ander Herrera starting. Juan Mata will play in front of them, but more as a #10 than an out-and-out centre-midfielder.

Henrikh Mkhitaryan has had a relatively quiet last few games, but I don’t see Jose taking him out of things just yet. Jesse Lingard will play as the left-winger with Anthony Martial dropping to the bench. Zlatan Ibrahimovic will lead the line as per usual. 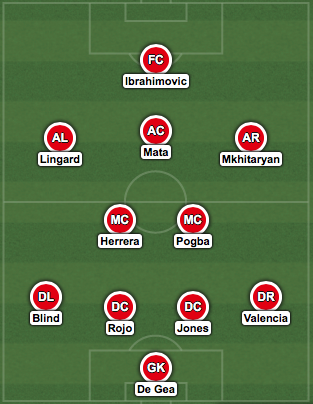 Manchester United are looking likely at the prospect of heading to Arsenal without their first choice goalkeeper available and ready. David de Gea picked up a finger injury which is set to keep him out […]