Manchester United’s form recently has been poor, leading to a fifteen point deficit in the Premier League title race.

Next up, another tricky fixture against Southampton. Jose Mourinho will be hoping the Old Trafford crowd will get behind the lads and roar them on to a much-needed three points.

In that game, I expect a few changes due to some poor form from our top stars.

Check out the predicted XI here: 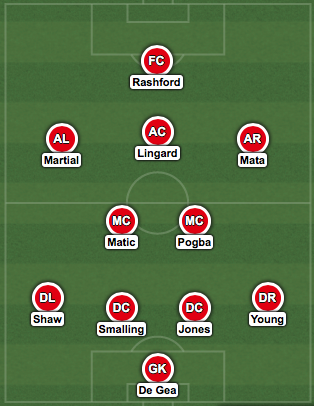 David de Gea will continue, with Phil Jones and Chris Smalling starting at centre-back due to a ban picked up by Marcos Rojo. Antonio Valencia is likely to miss out through injury, which means Ashley Young will stay on the right, with Luke Shaw playing on the left.

Nemanja Matic has been an absolute rock in the middle so he’ll continue. Paul Pogba will obviously play, with Jesse Lingard sitting just in front of those two. The Warrington-born-attacker has been great recently, so hopefully, we’ll see another great display from him.

Romelu Lukaku has been dismal recently and perhaps it’s time to sit him out for a game or two. That will allow Marcus Rashford to play through the middle; by far his best position. Juan Mata will start on the right with Anthony Martial getting the nod on the left.