Manchester United probably couldn’t have asked for a better start to the Premier League season, as Jose Mourinho’s team stuck four past West Ham United. Now though, attentions have turned to our first away game – a trip to Wales to take on Swansea City.

The self-proclaimed Special One is an absolute mastermind at picking different players for a change in situation, so, as per usual, we’ve done our best to try and work out what starting line-up the gaffer is going to go with. 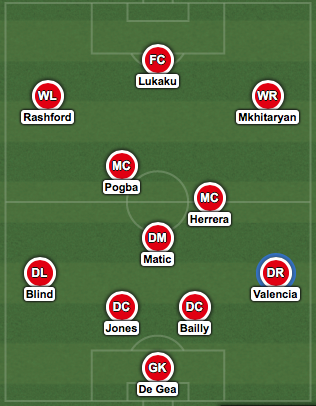 As you’d expect, David de Gea keeps his place in goal. For me, it’d be stupid to change the back four that performed so well against West Ham. Phil Jones and Eric Bailly worked wonders as the back two. On top of that, Daley Blind and in particular, Antonio Valencia played superbly.

The one change I expect to see the manager make is bringing in Ander Herrera. The Basque midfielder brings that extra defensive protection that could be needed in an away game, whereas Juan Mata is perfect for the home fixtures. Nemanja Matic will sit in front of the back four, and Paul Pogba will be able to get involved in the final third.

The front three was electric, dynamic and just class on Sunday. Why change a winning formula? Marcus Rashford was brilliant, as was Henrikh Mkhitaryan. Romelu Lukaku did the all-important thing of putting the ball in the back of the net, and hopefully, he’ll continue to do so. It was hard leaving Anthony Martial out, but keep him hungry and give him some more minutes as a sub.

About Jordan Street 15254 Articles
I'm a 25-year old aspiring writer and I created the blog as a platform to discuss all things Manchester United. Season Ticket holder block E332.
Website

Manchester United earned a vital three points away at Arsenal last time out, and reached the dizzy heights of fourth place in the table for the first time in a while. Louis van Gaal seems […]

Manchester United will be looking to continue a stellar run of form against local rivals Liverpool on Sunday afternoon. Louis van Gaal’s men moved up to third in the table last time out, and they’ll […]