Manchester United’s recent form has been much-improved since February, with Louis van Gaal opting for a 4-3-3 formation that has been successful in huge games, including away at Liverpool and the 4-2 drubbing of Manchester City in the derby.

It looks as though that formation is now here to stay, as Louis van Gaal stamps his authority on the current crop at Manchester United.

Next up is a tricky away game against Everton, and with several key players doubts for the game, Van Gaal may be forced to tinker with his side once again.

One area of the pitch that should remain the same is the front three. Ashley Young, Juan Mata and Wayne Rooney have all been sensational recently, and it’d be unfair of them if any were changed after the Chelsea game.

Daley Blind could move back into the midfield due to Michael Carrick’s injury, with Ander Herrera and Marouane Fellaini in front of him.

The back four consists of the English trio of Luke Shaw, Chris Smalling and Phil Jones, with Antonio Valencia starting at right-back, and obviously De Gea in goal. 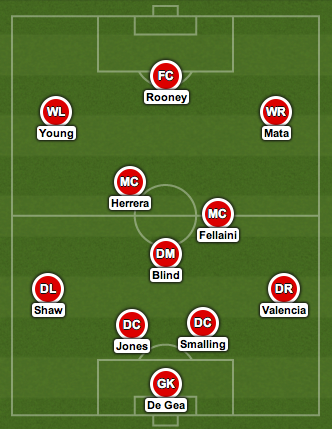 Manchester United play the second team from the North-East this week, as they head to Tyneside to take on a Newcastle United side who seemed to have slipped since the departure of Alan Pardew. Louis […]

Manchester United will look to maintain their unbeaten record on Sunday, as Louis van Gaal prepares his team to take on a potentially tricky Swansea City who have started this campaign with some excellent form […]

Manchester United sit third in the league after a superb win over Liverpool at the weekend, but attentions have now been turned to European competition, with Louis van Gaal taking his team to his homeland […]