Manchester United Football Club take part in the second derby of the season tomorrow, with Jose Mourinho’s men playing host to Guardiola’s blues. The game takes place in the newly-renamed EFL Trophy, with United desperate for some revenge in this one.

We’ve taken injuries into account and put together a likely line-up for the match, and you have to say that it does look rather nice all things considered.

David de Gea starts in goal, with Daley Blind and Timothy Fosu-Mensah in front of him, coming in for the injured Eric Bailly and the struggling Chris Smalling. Antonio Valencia will play at right-back, with Luke Shaw coming back into the mix.

Marouane Fellaini is another man who’ll be missing through injury, so in comes Michael Carrick in that holding midfielder role. He will protect the back four, allowing Ander Herrera and Paul Pogba to bomb forward.

We’ll also likely see a much-changed front three with both Henrikh Mkhitaryan and Anthony Martial earning starts. Marcus Rashford will make up the front three purely down to his blistering pace. 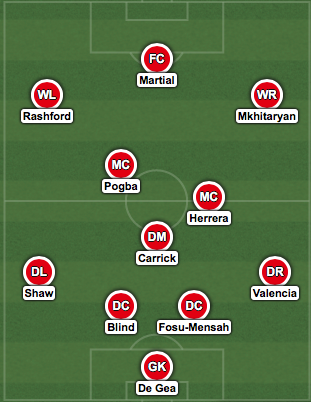 Manchester United return after a two week absence since the humiliation away at Arsenal, and the next game up certainly doesn’t get any easier. Louis van Gaal takes his side to Everton away, in one […]

4-3-3: Manchester United XI vs Sunderland – Mata & Herrera in, Fellaini out

Manchester United will be looking to get back to winning ways away at Sunderland this weekend, with Louis van Gaal hoping to keep morale and confidence flowing after three good performances in a row. With […]