Attentions turn back to continental football this coming Thursday, with Manchester United looking to get another win on the board to take control of their group. Feyenoord are the visitors, with Jose Mourinho wanting to extract some revenge for the 1-0 win they inflicted on us in September.

Before the game, we’ve drawn up what’ll likely be the starting eleven, and it looks strong despite a few changes.

In goal, we have David de Gea, and he’ll have Phil Jones and Daley Blind just in front of him. Antonio Valencia is back in action which is brilliant as he’s our best right-back. Luke Shaw will also come back into the mix.

Onto the midfield, and Michael Carrick will likely be rested. Morgan Schneiderlin should get a rare start, with the dynamic duo of Ander Herrera and Paul Pogba sitting in front of him.

Jose has already confirmed that Henrikh Mkhitaryan will play, and we’ll probably see Zlatan Ibrahimovic involved from the get-go. Jesse Lingard makes up the front three. 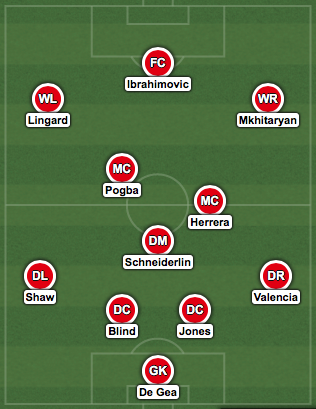 Manchester United Football Club have started the league in lethargic fashion. Jose Mourinho’s men are already eight points off the pace. We’re just six games in. The Red Devils get a welcome break as attentions […]

Aaron Wan-Bissaka to Manchester United is official. The right-back, aged just 21, becomes Ole Gunnar Solskjaer’s second summer signing behind Daniel James. Signings is something that the Red Devils certainly need to press on with […]