Manchester United kick off their Premier League campaign away from home this year, with Jose Mourinho heading to the South coast. He takes on Eddie Howe’s Bournemouth side who had a solid debut season in the top flight in England.

This won’t be an easy starting point for United, but we’ve decided to pick a probable starting line-up for the match; and you have to say, it looks extremely strong.

David de Gea will get the nod in goal, and perhaps the most easiest part of the team to pick is the back four as Mourinho has started with the same players for the last few games. Luke Shaw, Daley Blind, Eric Bailly and Antonio Valencia.

The midfield trio now looks a whole lot stronger with the arrival of Pogba, and despite match fitness, I reckon Jose will throw him straight in there. Morgan Schneiderlin will be the protector of the back four, with Michael Carrick and the aforementioned Frenchman sitting just in front of them.

Onto the front three. Zlatan Ibrahimovic’s inclusion is a no brainer, but the wingers were tough to pick. Jesse Lingard probably did enough to keep Henrikh Mkhitaryan on the bench, and Anthony Martial’s talent will likely do enough to keep him in Jose’s XI. 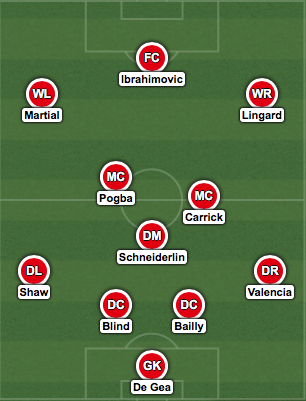 Manchester United’s attentions turn back to continental football and the Europa League tomorrow night, with Jose Mourinho’s side going one win and one loss in their two games so far. The lads will be hoping […]

Manchester United return to Old Trafford for a rare 3pm Saturday kick-off against Hull City this weekend, and Louis van Gaal’s injury-hit squad may receive a boost in the form of a centre-back. According to […]

4-2-3-1: Manchester United XI vs Sunderland – Schweinsteiger back in

Manchester United simply have to get back to winning ways this weekend, if the club plan on making it into the top four come May. Louis van Gaal takes his side to the Stadium of […]