Manchester United Football Club takes on Chelsea this weekend, in a huge game that could well shape the remainder of our Premier League season.

Jose Mourinho has found it tough against the big-boys since taking over as Red Devils boss, but arguably our best performance under the self-proclaimed Special One came in this fixture last year; with United winning 2-0.

Ahead of that game, let’s take a look at the starting line-up that we could well see deployed by the gaffer: 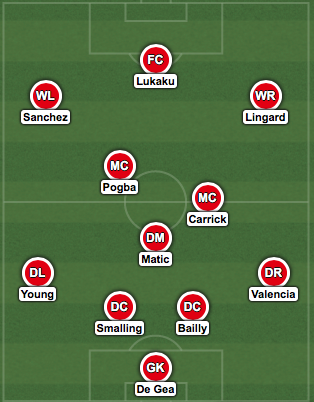 David de Gea will obviously start in goal. He’ll be feeling in confident mood after a wonderful display against Sevilla in midweek. In front of him, Eric Bailly returns for his first start in months, he’ll partner Chris Smalling. Ashley Young has been preferred at left-back for the bigger games, so I fully expect that trend to continue. Antonio Valencia will start as right-back.

The 4-3-3 will remain, with Nemanja Matic sitting at the base. Michael Carrick comes back into the mix, with Paul Pogba the most advanced midfielder of the trio. We’ll need a huge performance from him.

Since Alexis Sanchez’s arrival, United’s attack has stunted somewhat as everyone works out their new roles. The Chile star will play on the left, with Jesse Lingard starting on the right. Romelu Lukaku gets the nod up top.

Manchester United return today, after a two week absence due to the international break. Louis van Gaal won three out of three Premier League matches in March, and he’ll be looking to kick off April […]

Manchester United take on manager-less Middlesbrough tomorrow lunchtime, with Jose Mourinho’s men looking to capitalise on Arsenal dropping more Premier League points. The game itself won’t be easy, particularly on the back of a gruelling […]