Manchester United Football Club got another win under their belts on Boxing Day, as Jose Mourinho beaten out stiff competition from David Moyes’ men. Matches are coming thick and fast right now, and next up is Middlesbrough at Old Trafford for another stern test.

We’ve decided to work out Jose Mourinho’s thinking, and give you our predicted starting XI for the game that takes place on Saturday.

In goal, we obviously have the supremely talented David de Gea. He’ll have the now customary duo of Phil Jones and Marcos Rojo just in front of him, who have both been excellent. Antonio Valencia has been a joy to watch recently too so he’ll continue. Daley Blind has to start at left-back.

Protecting the back four will be a job handed to Michael Carrick, allowing both Ander Herrera and Paul Pogba that extra bit of freedom just in front of him. The team is rounded off with Jesse Lingard, the recently returned from injury Henrikh Mkhitaryan and Zlatan Ibrahimovic. 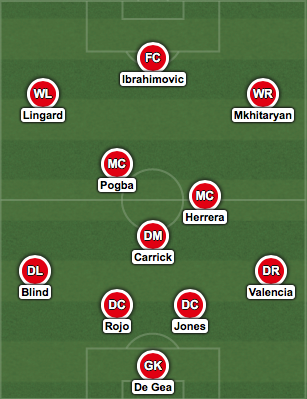 The boys desperately need to win this one to keep the pace with the rest of the teams ahead of them – or even capitalise on a mistake when one of the five above us do drop points. Liverpool and Manchester City take on each other on New Years Eve, so something has to give…

3-5-2: How Manchester United could line up with this tactical switch under Jose Mourinho

Manchester United kicked off their 2017/18 campaign in stunning style – sticking four past West Ham United at the Theatre of Dreams. During that game, we stuck with the usual four at the back formation. […]

Attentions turn back to continental football this coming Thursday, with Manchester United looking to get another win on the board to take control of their group. Feyenoord are the visitors, with Jose Mourinho wanting to […]