Manchester United’s next game takes place on Sunday afternoon, when the Red Devils head North to take on Newcastle United.

Jose Mourinho’s men will be in buoyant mood following a victory last time out against Huddersfield Town, but the self-proclaimed Special One has never won a Premier League away game at St. James’ Park.

Ahead of that match, we’ve drawn up the likely starting XI that we’ll see take on Rafa Benitez’s team. 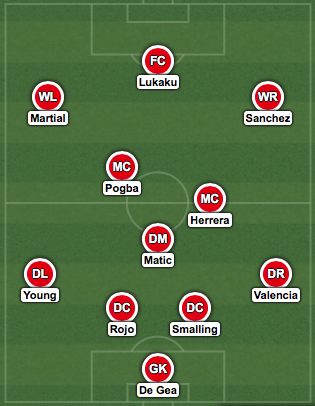 David de Gea will obviously start in goal, and I expect Mourinho to name an unchanged centre-back pairing of Marcos Rojo and Chris Smalling. Ashley Young will come back into the team as he’s more defensive-minded, with Antonio Valencia completing the back four.

Nemanja Matic will start as the base of a three-man midfield. He’ll be tasked with solely breaking up Newcastle attacks. Ander Herrera will bring some much-needed energy to the midfield, which will, in turn, allow Paul Pogba to play higher up the pitch.

Anthony Martial deserves to keep his place as the left-sided attacker, with Alexis Sanchez playing on the right but no doubt the pair will chop and change throughout the match. Romelu Lukaku leads the line.

Manchester United returned to winning ways last time out as the Red Devils went to Stamford Bridge and dominated Maurizio Sarri’s men. Next up, another tough assignment. This time it’s Liverpool, although United will have […]

Manchester United have strung three home wins together in a row now, ahead of the visit of Chelsea in a few weeks time. Louis van Gaal’s new-look Manchester United side have been very fun to […]