Manchester United are playing some excellent football right now, and Jose’s men are now unbeaten in nine fixtures across all competitions. Our last two league games have churned out six points, and the players will be looking to keep that going against West Bromwich Albion on Saturday evening.

Ahead of the game we’ve decided to work out the predicted starting line-up for the match, and in all honesty, it doesn’t make sense to change a winning formula up all that much.

David de Gea made a couple of super stops against Palace and he will obviously start. The now regular back two of Phil Jones and Marcos Rojo have to continue to play as they’re bang in form right now. Daley Blind did well at left-back and should get the nod over Matteo Darmian. Antonio Valencia is now available after suspension and will come into the side.

Michael Carrick will sit just in front of the back four, with Ander Herrera and Paul Pogba making up a supremely talented midfield trio. The front three doesn’t have all that much pace, but they make up for that in pure quality. Juan Mata will start on the right of Zlatan Ibrahimovic, with Wayne Rooney just on the left. These lads can all chop and change throughout the match though.

Check out the starting XI in full here: 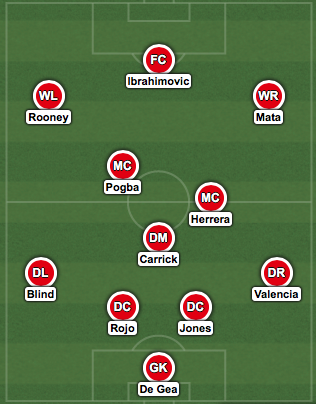 Manchester United return to Old Trafford for a rare 3pm Saturday kick-off against Hull City this weekend, and Louis van Gaal’s injury-hit squad may receive a boost in the form of a centre-back. According to […]

Manchester United Football Club turn their attentions back to the Premier League this weekend, with a win here essential to cling onto any hopes of finishing in the top four this season. As games come […]

4-2-3-1: Manchester United potential XI vs Burnley – Mkhitaryan gets a start

Manchester United Football Club come into this one on the back of an excellent result against City, with Jose Mourinho’s men making it safely through into the quarter-final of the cup. Now, attentions turn to […]