Tonight sees Manchester United’s fourth Champions League group game of the season, with Louis van Gaal’s side currently sitting in second place in their group. The lads have a real chance to throw a marker down by getting a win tomorrow, and putting some distance between themselves and the chasing duo.

Ahead of the game there was some mixed injury news from Louis van Gaal. Memphis Depay will miss the game whereas Phil Jones has been passed fit.

The 23-year old will come straight back into the side alongside Chris Smalling, with Matteo Darmian and Marcos Rojo holding down the wide spots.

Morgan Schneiderlin is looking likely to miss the game due to personal reasons, so we’ll probably see Michael Carrick holding down that defensive midfielder role.

There could also be no Wayne Rooney in the side as Louis van Gaal hinted he may rest his captain – this could provide Anthony Martial with the chance he needs to secure that regular starting spot as a striker.

Check out the probable XI here: 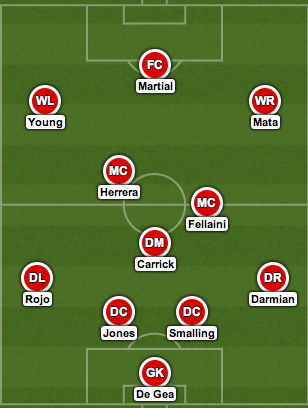 About Jordan Street 15651 Articles
I'm a 25-year old aspiring writer and I created the blog as a platform to discuss all things Manchester United. Season Ticket holder block E332.
Website

Manchester United’s winning run was ended with a 1-1 draw at Villa Park on Saturday, and Louis van Gaal will be looking to get back to winning ways with Newcastle visiting on Boxing Day. Manchester […]

Manchester United’s scintillating display against QPR saw the birth of a new setup under Louis van Gaal, as we played the 4-4-2 diamond formation for the first time. This system allows the Iron Tulip to […]

Manchester United and Cambridge went head-to-head just over a week ago, and the League Two side fought valiantly to earn a big payday and a replay at Old Trafford. The game tomorrow should be completely […]