Manchester United’s spot in the top four this season is by no means a certainty, with the side looking some way off the pace at the moment. Louis van Gaal’s side play host to Arsenal and Arsene Wenger, and this simply put is a must win for the Old Trafford side.

Wayne Rooney will lead the line on his own, with two wingers who are full of pace in-behind him – Anthony Martial and Adnan Januzaj.

A trio in the middle of the park should have more than enough between them to combat with the Arsenal midfield. The deepest of the three will be Morgan Schneiderlin, with Michael Carrick and batman Schweinstieger just in front of him. 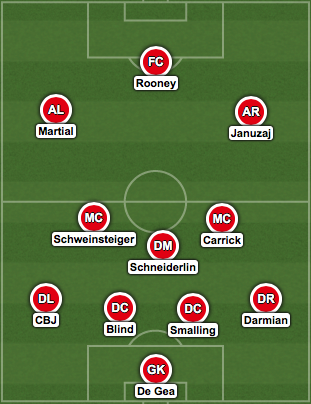 4-3-3: Man United predicted XI vs Swansea City – Herrera comes in to the line-up

Manchester United probably couldn’t have asked for a better start to the Premier League season, as Jose Mourinho’s team stuck four past West Ham United. Now though, attentions have turned to our first away game […]

Manchester United’s hopes of finishing in the top four are hanging on by a thread, with Louis van Gaal having just three games left to salvage his season. Next up is a tricky trip away […]