Manchester United’s Europa League campaign continues tomorrow, with Louis van Gaal hoping for progression into the round of sixteen. There is certainly added incentive in the competition this year, with a spot in the Champions League up for grabs for the eventual winner.

With that in mind, a strong line-up is a must here for Manchester United. David de Gea will continue in goal, with Guillermo Varela deserving of his spot in the XI, alongside Chris Smalling, Phil Jones and Cameron Borthwick-Jackson.

Morgan Schneiderlin will play as the holding midfielder, with Michael Carrick just in front of him pulling the strings. Anthony Martial will start on the left, with Ander Herrera playing in the #10 slot. Adnan Januzaj will get a rare start on the right with Wayne Rooney leading the line. 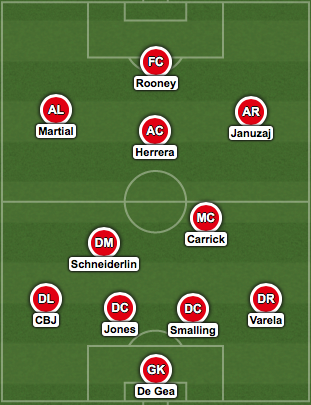 After back-to-back cup games recently, Manchester United’s focuses will turn towards the bread and butter of the Premier League. Jose Mourinho will be wanting to get back to winning ways in this competition after two draws […]

Manchester United Football Club’s slim chances of finishing in the top four continue this midweek with a potentially tricky game against Crystal Palace. Three points here are a must, with Louis van Gaal looking to […]

Manchester United have their second league home game in a row on Sunday, as they host Roberto Martinez’s Everton, who are flying under their Spanish manager. United’s injury-hit squad is slowly coming together bit by […]