Manchester United take on FC Midtjylland in the Europa League tomorrow, with Louis van Gaal’s side looking to progress into the last sixteen round over two legs. Ahead of the game we’ve decided to have a look at the potential starting line-up.

David de Gea will continue in goal, with a back two of Daley Blind and Chris Smalling in front of him. The full-back slots are filled by two youth products in the form of Guillermo Varela and Cameron Borthwick-Jackson.

The midfield trio looks very strong. Michael Carrick will anchor the midfield, with Marouane Fellaini and Ander Herrera just ahead of him. Anthony Martial has to continue on the left hand side, with Jesse Lingard on the right. Wayne Rooney will continue to lead the line on his own.

This is a game that Manchester United simply have to win, especially given the extra incentive that winning the Europa League now gives you a spot in the Champions League next season. 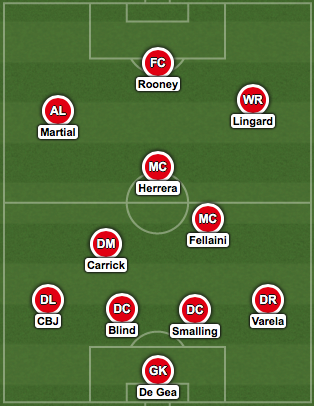 Manchester United Football Club certainly mean business during this transfer window, with Jose Mourinho looking to conclude deals as soon as possible. The self-proclaimed Special One has already signed Eric Bailly, and deals for Ibrahimovic […]

4-3-3: Potential Man Utd XI for next season including Depay

The 2014/15 campaign is over, and now begins the time for Louis van Gaal to start his meticulous planning for next term. Obviously big changes are expected in terms of ins and outs at Old […]