Manchester United return to continental competition this coming Tuesday, with Louis van Gaal’s side hosting CSKA Moscow. The teams met just a fortnight ago and played out an entertaining 1-1 draw in a game that Manchester united could have easily won and taken complete command of their Champions League group.

This coming game is certainly a must win, and Louis van Gaal must set his side up to attack and go for all three points – or it could cost us our spot in Europe’s premier competition.

Anthony Martial could get his chance up top, with Louis van Gaal finally dropping Wayne Rooney. There should be pace either side of him, in the form of Ashley Young and Jesse Lingard who both looked sharp coming off the bench over the weekend.

Marouane Fellaini was perhaps the better performer against Middlesbrough in the cup a week ago, and he has more than earned his place in the line-up alongside Ander Herrera and Morgan Schneiderlin.

Hopefully Phil Jones is fit and ready to go as he is certainly building a solid partnership next to Chris Smalling. The full-backs won’t change due to various injuries in those positions. 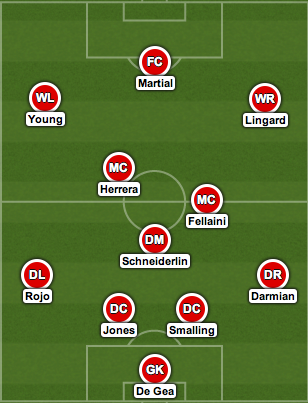 Manchester United’s attentions turn to the newly-renamed EFL Cup tomorrow evening, with a trip to Northampton Town on the cards. The game won’t be easy, particularly as Jose Mourinho’s men go into it on the […]

Manchester United got back to winning ways at home to Leicester City yesterday, and on Tuesday they’ll be looking to right a few wrongs in terms of domestic cup football as they host League Two […]

Manchester United head to Stoke City on Boxing Day, inc hat could well be Louis van Gaal’s last game in charge if the result doesn’t go the right way. The Dutchman met the media ahead […]