Manchester United’s attentions now turn to the FA Cup, with a Monday night game under the floodlights in the offing this weekend. Louis van Gaal takes his side to take on Football League One side Shrewsbury Town, who have done extremely well to get to this stage.

This could be the perfect chance to give our youngsters a run out, whilst playing those who haven’t been given all that many minutes recently. Will Keane deserves the chance to lead the line, and he’ll have his U21 colleague Andreas Pereira in behind him, with Memphis Depay on the left.

Ander Herrera will be the furthest forward midfielder, with Marouane Fellaini and Morgan Schneiderlin holding the midfield. They should be more than capable of winning that battle.

Cameron Borthwick-Jackson and Guillermo Varela will play in the full-back slots, with Phil Jones and Chris Smalling starting as the centre-back pairing. Sergio Romero will get a rare outing in goal. 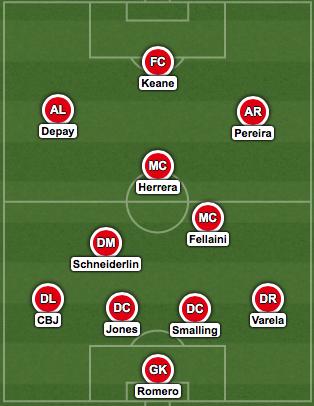 4-3-3: Potential Man United XI for next season including Fred

Manchester United will undoubtedly have huge plans for 2017/18. Jose Mourinho has a big summer on his hands, and no doubt the Old Trafford faithful will be begging for some huge signings. One man who […]