Manchester United are without a win in eight games now, and the pressure on Louis van Gaal seems to be greatly increasing wth each passing week. It doesn’t get any easier for the Iron Tulip either, as a side he has never beaten are next up – Swansea City.

Ahead of the game he has some big team selection decision to think about, and one we’d all like to see is Anthony Martial starting as the main striker. Ashley Young deserves his chance in a more attacking role, with Juan Mata once again playing on the right.

Ander Herrera was great last time around and he deserves to continue, with Bastian Schweinsteiger and Morgan Schneiderlin in-behind the Spaniard.

Matteo Darmian and Guillermo Varela will play as the full-backs, allowing Daley Blind and Chris Smalling to continue their superb partnership at the heart of defence. 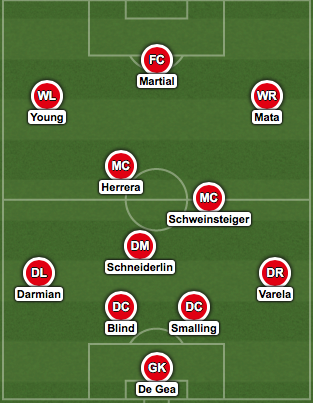 Manchester United are sitting joint top of the Premier League table right now, alongside fierce rivals Manchester City. The games are starting to come thick and fast across all competitions, and next up is a […]