Manchester United head to London this weekend, to take on a Watford side who have been one excellent form over the last few games. Ahead of the match, there has been plenty of injury concerns, meaning the gaffer has to change his pack somewhat.

A 4-3-3 formation with counter attacking ability is probably the best way to go about this one, and spearheading a front three full of pace is Wayne Rooney, with Jesse Lingard and Memphis Depay either side of him.

A midfield trio of Ander Herrera, Bastian Schweinsteiger and Morgan Schneiderlin provides the perfect blend of passing range, ability to run with the ball and defensive awareness.

The back five of Marcos Rojo, Chris Smalling, Phil Jones and Matteo Darmian looks solid enough, and with David de Gea in goal he’ll certainly be tough to beat when the defence is penetrated. 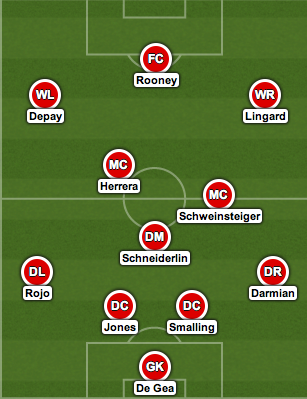 After a dire performance in the Champions League, Manchester United’s attentions turn to a top of the table clash away at Leicester City – the surprise package in the Premier League this term. Louis van […]

4-2-3-1: Manchester United XI vs Sheff Utd – youngsters get their chance

Manchester United Football Club kick off their FA Cup campaign this coming Saturday, in a game against lower league opposition in Sheffield United. This tournament could be a real chance for silverware for Louis van […]

Capital One Cup football returns to Old Trafford tomorrow evening, with Louis van Gaal preparing his side for a potentially tricky clash against Middlesbrough who are looking great in the Championship to this point.