Manchester United head South to take on newly promoted Watford this weekend, after a two-week break due to the international break. Louis van Gaal will be hoping to kick the hectic winter period off on the right foot, and a win away from home would be a good start.

Getting into the starting line-up, we could see a 4-3-3 deployed, with full of pace and creativity in the front three. Wayne Rooney will lead the line, with Anthony Martial and Jesse Lingard either side of him.

Juan Mata will be reverted to a more familiar #10 role, with the sold pairing of Morgan Schneiderlin and Bastian Schweinsteiger backing him up.

The back five of Marcos Rojo, Phil Jones, Chris Smalling and Matteo Darmian, with David de Gea in goal has been extremely solid in the games they have played together. So hopefully that’ll continue and we can come away with all three points.

Check out the probable XI here: 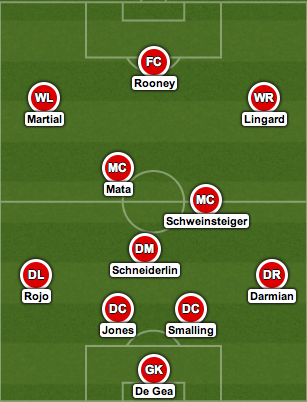 Manchester United go head-to-head with their fiercest rivals Liverpool tomorrow, with Jose Mourinho’s team looking to grab a victory to cement their place in second. After two come-from-behind victories against both Chelsea and Crystal Palace […]

Manchester United take on Liverpool this weekend, in one of the most eagerly anticipated fixture lists on the calendar. Louis van Gaal’s side come into this one with good recent form against their fiercest of […]